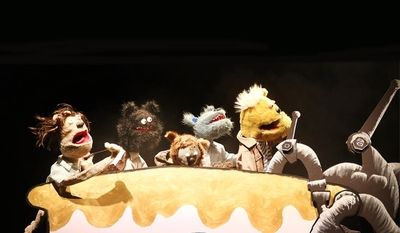 THE SEASON is a »puppet-heavy indie musical« conceived and composed by Montréal’s Josh Dolgin aka Socalled. The pianist, rapper, magician and cartoonist has – in addition to releasing six solo albums and worldwide touring – collaborated with musicians as different as Chilly Gonzales, Wu-Tang Clan’s Killah Priest, Irving Fields or “the architect of funk music” Fred Wesley, famed for his work with James Brown, George Clinton or Parliament, arranger on THE SEASON and now starring in THE 2ND SEASON.

THE 2ND SEASON is conceived as a full-length work that stands on its own and does not require knowledge of THE SEASON, Socalled’s hilarious, sophisticated and heartwarming musical. This first part was conceived and composed by Socalled for a one night only performance at Pop Montréal festival in 2011, released as an album in 2013 on Dare To Care Records, and re-staged at the International Summer Festival at Kampnagel in August 2014 with 5 sold out performances in a venue with 300 seats. The opalescent musical melts folk music, HipHop, klezmer, funk and recalls the golden age of Broadway musicals. By means of puppetry, acting, dance and live music, THE SEASON tells the dramatic love story of Bear, a hipster animal living in the forest with his animal friends, and an extraterrestrial named Tina, which arrives to the forest from outer space with a bunch of red-haired fluffy companions. THE SEASON deals with Xenophobia, economic crisis, friendship and existentialism and ends with the dramatic separation of Bear and Tina, who had to return to her planet.

THE 2ND SEASON explores themes of industrialization, urbanization, addiction and gentrification, telling the story of Tami, the daughter of Tina and Bear, who arrives on earth to search for her father Bear. With the help of Bear’s buddy Beaver she finds him enslaved in the city working in a trombone-factory – run by legendary trombonist Fred Wesley, the only human character in this piece. Putting the relationship between the puppets and the puppeteers constantly in focus, it’s also a meta-theatrical play with an unpretentious DIY-touch and an experiment in theatrical togetherness; an elevated community theatre event bringing together an unprecedented diversity. THE 2ND SEASON will feature a total cast of 16, consisting of 3 puppeteers, 1 dancer and Fred Wesley as performers on stage and 7 musicians plus 4 vocalists set up behind a scrim on the stage.

Josh “Socalled” Dolgin is a pianist, accordionist, producer, journalist, photographer, filmmaker, magician, cartoonist and puppet maker based in Montreal, Quebec. He has lectured and has led master classes in music festivals around the world, from Moscow to Paris, from London to LA, and from Krakow to San Francisco, and has performed on every continent. With 6 solo albums to his name, he has performed all over the world for more than 10 years, and his list of collaborators knows no generational, social, cultural nor religious boundaries. Aside from countless festivals and venues around the world, Socalled has performed at Carnegie Hall (twice!), the Olympia in Paris, the Apollo theatre in Harlem and the Arsht centre in Miami. He has played with, featured, recorded and arranged for Gonzales, Itzhak Perlman, Lhasa, Fred Wesley, Andy Statman, Adam Cohen, Boban Markovic, the Mighty Sparrow, Roxanne Shante, Irving Fields, Killah Priest, Matisyahu, Theodore Bikel, Enrico Macias and Derrick Carter… Dolgin was the subject of The Socalled Movie, a 2010 feature documentary produced by the National Film Board of Canada.

In 2003, his collaborative album Hiphopkhasene with British violinist Sophie Solomon won a German Record Critics Award (Preis der deutschen Schallplattenkritik). Then, in 2005, he released an EP based on the Passover service, The Socalled Seder, which he produced in his apartment and sold through the mail in a world before the internet, with almost 1000 mail-orders! It was eventually officially released by Jewish hipster label JDub and hailed as one of the greatest new Jewish Music records.

He started to work with renowned clarinetist David Krakauer, producing his genre-twisting “Bubbemeises” record, which led to an offer from French Jazz label Label Bleu to record his first proper solo album. Featuring about 40 guests from all walks of musical life, Ghettoblaster featured the breakout hits “The Good Old Days” and “You Are Never Alone”, the video of which garnered some 3 million views on Youtube. Ghettoblaster was on the longlist for the Polaris prize. The collaboration with Krakauer led to a project with James Brown’s arranger Fred Wesley “Abraham Inc” and the album of funk meeting Klezmer, “Tweet Tweet”.

In 2011, Socalled came back with the 30+ guest-heavy Sleepover, which was nominated for a Juno award, and in 2013 he released the collection of songs he composed for The Season, a puppet indie musical fable for the 21st century he also wrote and directed, which was remounted at the prestigious Kampnagel festival in Hamburg, Germany. His original Yiddish gangster puppet musical, “Isaac Babel’s Odessa Stories”, was presented at the Segal Center in Montreal in 2013: the cast recording will be released shortly. His work with cellist Matt Haimowitz, a re-working of Messiaen’s Quartet for the End of Time, garnered another Juno award nomination. In December 2015, Socalled was presented with the “Adrienne Cooper Memorial Dreaming in Yiddish” award for his work disseminating and exploring Yiddish culture.

2015 saw the release of Peoplewatching, an offering of infectiously fun, passionate and timeless mini-odes for the booty pleasure of all, which featured a panoply of varied styles, languages and talents.

Sometimes Socalled is a producer for hire: he co-produced Enrico Macias’ “Voyage D’une Melodie”, and the first albums of Canailles and Geoff Berner. HIs remix of the theme for CBC’s flagship news digest “As It Happens” plays 3 times a day across Canada. Just last year Socalled produced Ben Caplan’s “Birds With Broken Wings”, Yves Lambert’s “Dans Ces Bottines”, Geoff Berner’s “We Are On the Way to Bremen” and Sarah Toussaint-Leveille’s “La mort est un jardin sauvage”. When he’s not working in the studio, Socalled makes cookbooks, draws cartoons, edits video and practices Kurt Weill on the piano.

Joe Cobden is an actor, performer, writer and director from Halifax (Canada) that lives and works in Los Angeles and Montreal. He was the first Anglophone to win a Les Masques theatre award - for “The Beauty Queen of Leenane” (Centaur Theatre) and “The Facts Behind the Helsinki Roccommatios” (Infinitheatre). He’s also won 3 MECCAs (Montreal English Circle Critic’s Award) for his acting. Joe completed the Theatre Acting programme at Concordia University a while back. Since then he’s done a whole bunch of plays and tv shows and movies. Recent theatre credits include: “The Eco Show” with Daniel Brooks for Necessary Angel; “Beyond Mozambique” for Factory Theatre; “Untitled Faction Project” with Ame Henderson for Public Recordings; “Golden Age” a solo radio-play for CBC radio, which Joe wrote and performed live; “Tour de France” with Buck 65 all over France; “One Night Only” with Josh Dolgin/Socalled. Recent films include “X-Men: Apocalypse” (dir. Bryan Singer), “Blindness” (dir. Fernando Mereilles); “I’m Not There” (dir. Todd Haynes); “Le Piege Americain” (dir. Charles Biname); “Human Trafficking” (dir. Christian Duguay); “The Aviator” (dir. Martin Scorcese); “Confessions of a Dangerous Mind” (dir. George Clooney); “Peepers” (dir. Seth W. Owen); in 2016 he appeared on the tv series “Modern Family” and “Fargo”. As a director he produced short films like “Sigh” (for Bravo television),  “Slow Dance” and “Cycles” (the latter premiered at this 2016 Toronto Film Festival). In November 2016 he will be releasing “Knuckleheads”, the English adaptation of the popular French series Têtes à claques (which began in 2006 and recently won the Gemeaux for Best Television Animated Series). The cartoon comedy show with 22 episodes in its first season will be played regularly on Teletoon. In THE SEASON: PART I Joe starred as THE BEAR.

FRED WESLEY(born July 4, 1943) is an American jazz and funk trombonist, best known for his work with James Brown in the 1960s and 1970s, as well as Parliament-Funkadelic in the second half of the 1970s. In 2015, Wesley was inducted into the Alabama Jazz Hall of Fame. Wesley was born the son of a high school teacher and big band leader in Columbus, Georgia, and raised in Mobile, Alabama. As a child he took piano and later trumpet lessons. He played baritone horn and trombone in school, and at around age 12 his father brought a trombone home, whereupon he switched (eventually permanently) to trombone.

During the 1960s and 1970s he was a pivotal member of James Brown’s bands, playing on many hit recordings including “Say it Loud - I’m Black and I’m Proud,” “Mother Popcorn” and co-writing tunes such as “Hot Pants.” His slippery riffs and pungent, precise solos, complementing those of saxophonist Maceo Parker, gave Brown’s R&B, soul, and funk tunes their instrumental punch. In the 1970s he also served as band leader and musical director of Brown’s band the J.B.’s and did much of the composing and arranging for the group. His name was credited on ‘Fred Wesley & the J.B.’s’ recording of “Doing It to Death,” which sold over one million copies, and was awarded a gold disc by the R.I.A.A. in July 1973. He left Brown’s band in 1975 and spent several years playing with George Clinton’s various Parliament-Funkadelic projects, even recording a couple of albums as the leader of a spin-off group, The Horny Horns.

Wesley became a force in jazz in 1978 when he joined the Count Basie Orchestra. He released his first jazz album as a leader, “To Someone” in 1988. It was followed by “New Friends” in 1990, “Comme Ci Comme Ca” in 1991, the live album “Swing and Be Funky”, and  “Amalgamation” in 1994. A reissue of never-before released Jazz recordings from early 70’s sessions was released in 2014 as “Watermelon Man”.

In the early 1990s Wesley toured with his colleagues from the James Brown band, Pee Wee Ellis and Maceo Parker, as the JB Horns. With the departure of Ellis the band became The Maceo Parker Band. Wesley was featured trombonist with Parker until 1996 when he formed his own band, The Fred Wesley Group, now known as Fred Wesley and the New JBs.

Wesley’s 45-year career includes playing with and arranging for a wide variety of other artists including Ray Charles, Lionel Hampton, Randy Crawford, Vanessa Williams, The SOS Band, Cameo, Van Morrison, Socalled and rappers De La Soul, to name a few. Many other artists have sampled his work.

In 2002 Wesley wrote Hit Me, Fred: Recollections of a Sideman, an autobiography about his life as a sideman. Also in 2002 he recorded an album entitled Wuda Cuda Shuda.

Wesley served as an adjunct professor in the Jazz Studies department of the School of Music at the University of North Carolina at Greensboro from 2004 to 2006, and now works with students as a visiting artist at numerous other schools including Berklee College of Music and Columbia College of Chicago. In addition to performing with his own band, he is currently touring as part of a collaboration called Abraham Inc. along with Klezmer artist David Krakauer and Klezmer/hip-hop artist Socalled.

Socalled’s THE SEASON was the big hit of Summer Festival 2014: the anarcho-puppet musical about forest-animal friends and a magical alien was such a success that we had to add extra shows. Now, THE 2ND SEASON will premiere in Kampnagel's International Summer Festival.