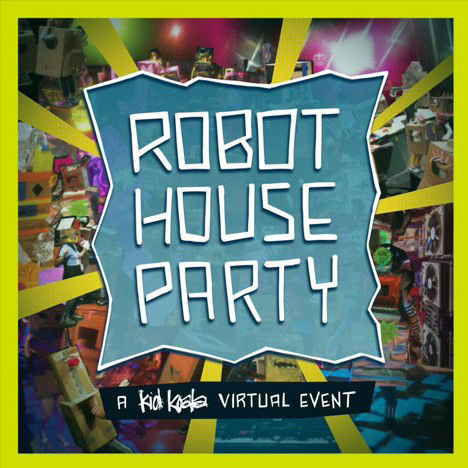 “Robot House Party” is a family friendly online livestream event that transforms your living room into a robot costume workshop and a dance party. Build your own robot costume while Kid Koala spins a live DJ set! Robot costumes can be constructed with materials you already have at home. Anything from cardboard boxes to aluminum foil can be used to help your robot come to life. Once the costumes are done and slipped on, it’s time to dance to the music of Kid Koala as he is accompanied by guest dancers. This livestream event invites people of all ages to channel their creativity and break it down on the dance floor!

Produced by Envision Management and Production

Eric San, a.k.a Kid Koala, is a world-renowned scratch DJ, music producer, composer, multimedia performer, and graphic novelist. He has released 6 solo albums as well as multiple EPs and soundtracks. He has collaborated with Gorillaz, Deltron 3030, and The Slew and has produced collaborative Music To Draw To albums with vocalists Emilíana Torrini and Trixie Whitley. He has toured with Radiohead, the Beastie Boys, Arcade Fire, Money Mark, Mike Patton, DJ Shadow and The Preservation Hall Jazz Band. Kid Koala's unforgettable live shows range from silly touring turntable carnivals like Vinyl Vaudeville, to immersive and emotive multimedia shows like Nufonia Must Fall, The Storyville Mosquito and Satellite Turntable Orchestra, each of which express his unique form of storytelling with music, animation, film, and interactive entertainment. He has contributed to scores for multiple films including The Great Gatsby, Baby Driver, Scott Pilgrim vs. the World, Zoom, Shaun of the Dead, Men, Women & Children, and Looper. He has composed music for The National Film Board of Canada, The Cartoon Network, Sesame Street, Adult Swim and The Winter Olympic Games. He has also been commissioned to create music for multiple runway shows for Belgian fashion designer, Dries Van Noten. He collaborated on and released the award winning multi-platform breakdance video game Floor Kids. He has also written/illustrated the award winning graphic novels Nufonia Must Fall and Space Cadet. Kid Koala has toured 6 continents and lives in Montreal, Canada.

Brian Neuman is an established tour and production manager based in Montreal, QC. He co-founded and ran the local promotion outfit Blue Skies Turn Black for over ten years, as well as owned and operated a successful music venue. Brian has booked and promoted hundreds of shows with artists such as Arcade Fire, Modest Mouse, Godspeed! You Black Emperor, Wolf Parade, Sufjan Stevens, Mastodon, Iron and Wine, Death Cab for Cutie, John Waters and many more. During his time at Blue Skies Turn Black, the company was voted " Best Local Promoter" in Montreal for eight consecutive years. He has since turned his expertise to managing production and tour logistics for artists such as Timbre Timbre, Patrick Watson, and many others. He lives in Montreal with his wife and two children.