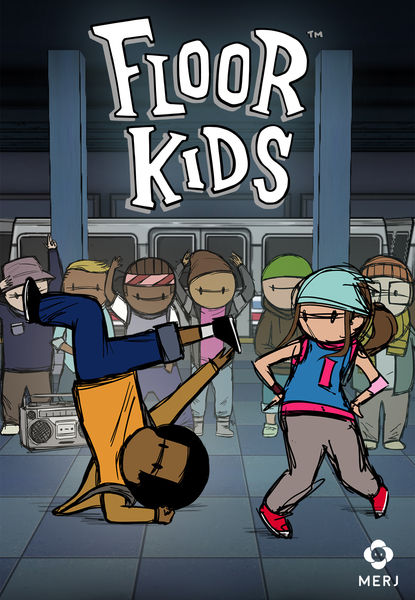 Floor Kids is a new breakdance battle game featuring unique freestyle gameplay, rhythm challenges, and multiplayer sessions. Discover stylized hand-drawn graphics by award-winning animator JonJon set to an original soundtrack by world-renowned scratch DJ/producer Kid Koala. Innovative controls allow you the freedom to play the way you like with a dynamic scoring system that rewards your moves based on musicality, originality, and style. Build up your crew of bboys and bgirls, unlocking new characters and locations as you cross the city, busting hundreds of different moves and countless combinations on your journey from the corner to the club. Bring Your Skills. Build Your Crew. Find Your Style.

Unlock 8 unique characters each with 16 moves and over 100 transitions between them.

Win over the crowds eith a scoring system that rewards musicality, originality, feel, and style

Dance in many different locations, either in solo freestyle mode or two-player local party mode

Floor Kids is an original idea by Montreal-based animator and former bboy JonJon. The Floor Kids first appeared in a series of short animated films produced in 2007-2008, featuring original music by Kid Koala, which were shown online and were incorporated in numerous Kid Koala's live concerts. In 2014, JonJon and Kid Koala joined together with Envision and Hololabs to create a video game based on the Floor Kids characters and universe. The team set out to develop a unique break dance video game featuring 2D hand-drawn characters and innovative controls that make you feel like you're dancing along with the character, all to the sounds of Kid Koala's awesome beats.

JonJon, AKA Jonathan Ng, is an award-winning animation filmmaker based in Montreal. His latest film Requiem For Romance, which he wrote, directed and animated in 2012, has toured festivals around the world and recently won the Best Art Direction award at Anima Mundi 2013. Born in Toronto, he studied animation at Sheridan, Seneca, and Concordia University in a variety of hand-drawn, 3D and experimental techniques, and won several Teletoon scholarships throughout his academic career. He wrote, directed and animated his first professional film Asthma Tech at the National Film Board of Canada in 2006 and then went on to co-produce his second film Floor Kids in collaboration with Kid Koala, which went viral in 2007. Jonathan also works as a freelance animator and his feature film credits include The Spiderwick Chronicles, The Mummy 3, The Day of the Crows and the upcoming animated films The Little Prince and A Rigged World.

Kid Koala is a world-renowned scratch DJ, music producer, film composer, video game composer and award winning graphic novelist. He has released six solo albums, the most recent being Music To Draw To: IO featuring Trixie Whitley. He has also released two graphic novels: Nufonia Must Fall and Space Cadet. He has also been involved in collaborations such as Gorillaz, Deltron 3030, and The Slew.

Kid Koala has toured with the likes of Radiohead, the Beastie Boys, Arcade Fire, Money Mark, A Tribe Called Quest, Mike Patton, DJ Shadow, and The Preservation Hall Jazz Band. He has contributed to scores for the films Shaun of the Dead, Scott Pilgrim vs. The World, Looper, The Great Gatsby and Baby Driver. He has composed music for The National Film Board of Canada, The Winter Olympics, the Cartoon Network, Sesame Street, and Adult Swim. He has also been commissioned to create music for runway shows for Belgian fashion designer Dries Van Noten. Kid Koala’s unforgettable live shows range from silly touring turntable carnivals like Vinyl Vaudeville (including dancers and giant puppets) to quiet-time events like Satellite Turntable Orchestra, and Nufonia Must Fall, a live animated graphic novel performed, filmed, projected, and scored in real time by a team of 15 using multiple cameras, miniature sets, puppets, a string quartet, and Kid Koala on piano, turntable and percussion.

He lives in Montreal with his wife and two daughters.

"Here I am, telling you about how much joy I’ve had completing Floor Kids. A great indie game which delivers on its premise and more. I can guarantee that music fans and rhythm-based gameplay fans will have a good, if not great, time playing this game." - Nick Burton, The XBox Hub

"Floor kids is way too cool for me" - Adrian Burrows, The Sixth Access

"It's funky, unique and different to anything else on out there right now – Floor Kids is a music game truly dancing to the beat of its own drum." - Darrly Edge, Cultured Vultures

Winner of the Figgie for "Epic Scope and Gameplay" at Boston FIG (Festival of Indie Games), 2016

Winner of the Big Indie Pitch at PocketGamer Connects Vancouver, 2016

Straight lists Floor Kids as one of 10 great video games you didn’t know were Canadian. Read the article here!

Floor Kids is now available on PS4 and XBOX

It's official - you can now play Floor Kids on PS4 and XBOX One platforms!

Kid Koala's breakdance battle game is out now on Steam and Nintendo Switch. The soundtrack is available on Arts and Crafts. 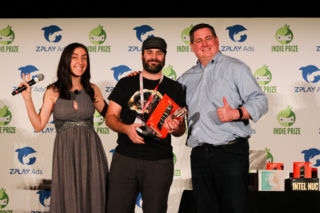 The winner of Best Game Audio was Floor Kids, developed by MERJ Media from Canada. Floor Kids is a break dance battle game that rewards musicality, originality and style. It can be played in solo freestyle mode or in two player battles. 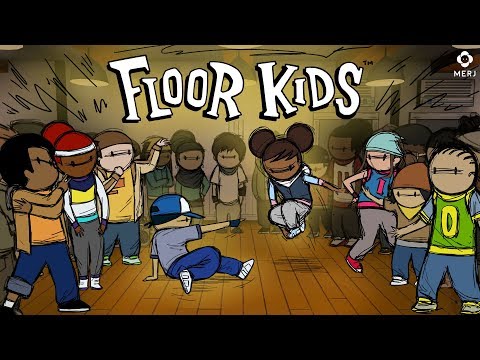 Check out this new gameplay highlight trailer from Floor Kids! This new breakdance battle game is coming out this holiday season on Nintendo Switch! 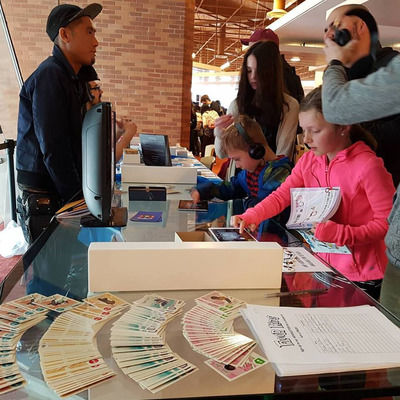 Jon and Phil from the Floor Kids team headed to the Comics x Games exhibit in Toronto earlier this month, part of the Toronto Comic Arts Festival. TCAF is The Toronto Comic Arts Festival, taking place in 2017 at Toronto Reference Library and the surrounding Bloor/Yonge neighbourhood in Toronto, Ontario, Canada. It is celebration of comics and graphic novels and their creators, which culminates in a two-day exhibition and vendor fair featuring hundreds of comics creators from around the world. Other Festival events include readings, interviews, panels, workshops, gallery shows, art installations, and much more. The full program and list of participating creators will be listed at this website, as well as in printed and digital program guides available on-site at the festival. 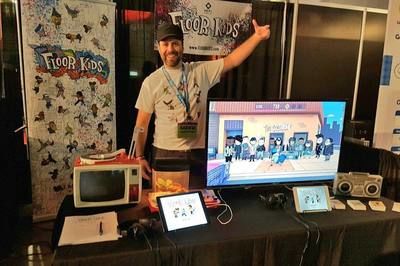 Drawing in developers, manufacturers, and fans from all facets of the community, the SXSW Gaming Expo is the epicenter of gaming culture at SXSW. The Floor Kids team travelled down to Austin, and set up a booth so festival goers could try the Floor Kids experience. 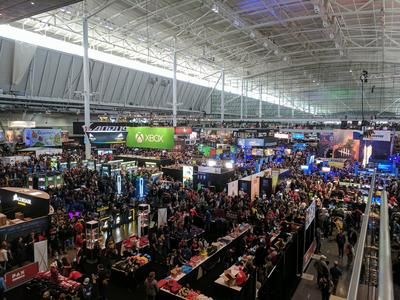 Floor Kids designers Phil Rostaing and JoDee Allen travelled down to to Boston from March 10-12 and show off Floor Kids at PAX East. PAX was founded with the intention of putting on a gaming show that the public could see, hear and experience. With over a hundred thousand square feet of show floor and all genres, platforms and styles of games represented, everyone is able to get a paste of the insanity that is a gaming industry expo hall. Over 150,000 people were said to have visited the expo during the three days. 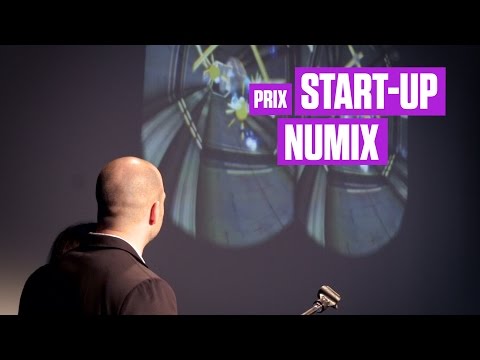 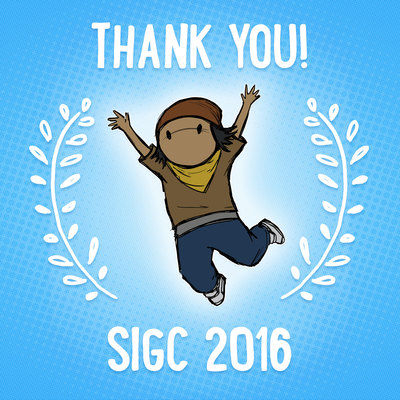 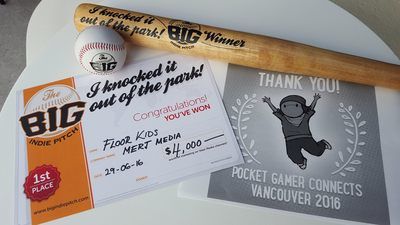 Floor Kids knocks it out of the park! 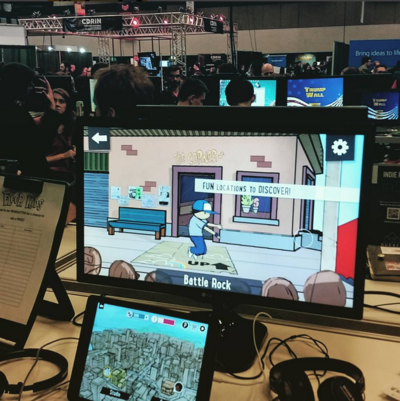 Floor Kids presented at the Indie Pitch session of the Montreal International Games Summit 2016! Catch them all day at the Expo Zone, to try out the game!

Floor Kids made an appearance at the Montreal Expo Gaming Arcade and spoke to Le Jounal de Montreal about the game that is coming out this December on Nintendo Switch!