Abdul Lateef and the Distraction Machine 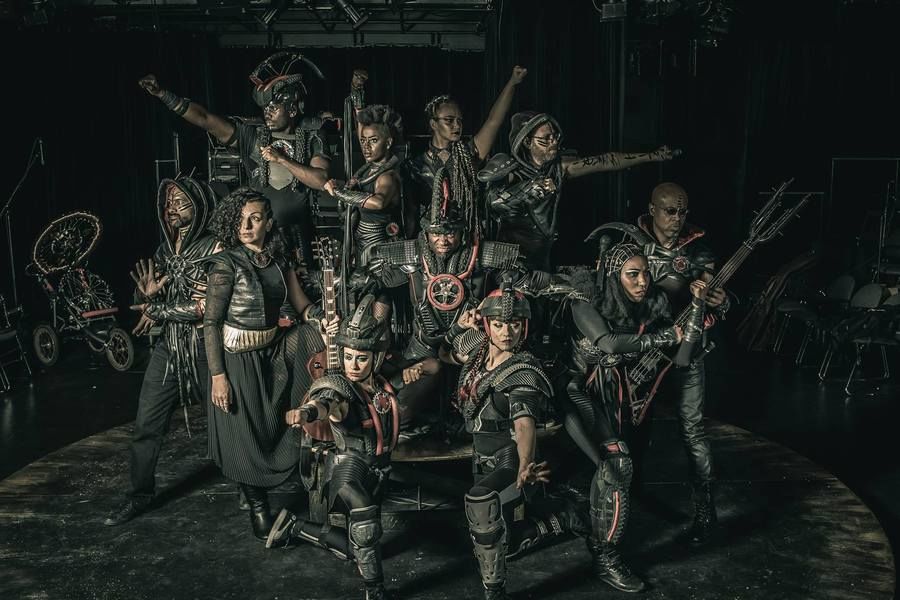 Step dancers wearing armor composed of bike tires, bike frames and found objects dash onto the stage in battle-dance formation, launching into an infectious polyrhythm. They encourage the audience to clap along. A high-pitched cry pierces the air as drums beat out a syncopated pulse, stringed instruments chime in while tone-drums and pipes provide a melodic backdrop. An MC steps to the fore and controls the crowd. Welcome to the world of Abdul Lateef and The Distraction Machine, grandmasters of performance and rhythm.

Abdul Lateef and The Distraction Machine hails from Miscellaneum Studios’ Z’Isle, a transmedia story set on Montreal seven years after a zombie apocalypse. In a small city with very few guns and its bridges blown, bullets ran out. Survivors turned to the most readily-available resource to create weapons: bikes. They eventually turned the tide against the undead while establishing a new culture. As much of the city was destroyed fighting the undead, machinery, tools and even new types of instruments were built using bikes. Enter The Distractors: masters of sound and rhythm. They control entire hordes of the undead, distracting them so that comrades could escape them or attack them from behind.

Distractors are also masters of entertainment, recounting tales of the war against the undead through dance, music, and vocals. A cross between Tao: 17 Samurai and Stomp, the live performance is part of a larger story told through the Z’Isle comic book series (now on issue # 6 sold in stores across Montreal) and a video game (presently under development) yet bearing its own unique flavour.

SOLD OUT: September 28-30 2018 at the MAI (Montréal, Arts Interculturels) presented by POP Montreal

Lateef Martin is a multi-disciplinary artist with a background in illustration, dance and music production and beatboxing. He along with a top production team of art direction and costume design created a show like no other.

Lateef Martin's Distraction Machine has performances on September 28th, 29th and 30th at the MAI.

Buy tickets and see the rest of the lineup at popmontreal.com.